Oakham Task & Finish Group Meeting #3 takes place at Catmose tonight at 6pm.  This evening’s meeting will see the ‘Research & Evidence’ and ‘Engagement and Communications’ sub-groups report back.  Also, there is a section titled ‘Definition of Oakham Town’ which, I trust, will address the scope issue mentioned earlier.

Attendance at OT&F Group Meeting #2 was predictably sparse and the meeting itself made for pretty poor fare with, it seems, practically nothing being actually decided except for the setting up of some ‘sub-committees’ and what should be the key issue of the moment, the changing of the scope of the Group by the Scrutiny Panel, simply kicked into the long grass….  Along with some very dated presentations from RCCs Director For Places and its Communications Officer.  This, of course, is exactly what RCC expects – the public lose interest in the long-term and then the Group is manipulated, with less and less of the public watching it, to achieve a pre-determined goal.  In any case, it’s becoming apparent that by far the bigger threat to Rutland as a whole is the looming, so-called ‘Garden Village’ with latest numbers of houses being reported in the local papers last week as being at 6000.  Further details on https://democracyrutland.com/and-another-thing/

Tonight, at 6pm, is the second meeting of the Oakham Task & Finish Group.  This is a critical meeting as we’ll see if the arbitrary scope change forced on the Group is waved through in the teeth of opposition from OK2WAY and other members of the Group.

Let’s hope that a good turn-out from the public will demonstrate to RCC that the One-Way issue cannot be quietly swept away …..

Following on from the discussion about the Scrutiny Panel arbitrarily changing the scope of the remit of the Oakham Task & Finish Group to ‘Oakham Town Centre’ and not ‘Oakham Town’ as had been previously agreed; it’s worth mentioning that at this month’s Full Council Meeting the phrasing used is again ‘Oakham Town’.  OK2WAY advise that they will be directly addressing this attempt to change the scope at T&F Meeting #2 on the 25th April and it is to be hoped that this first attempt to move the goalposts will be stopped in it’s tracks.

Wording from the formal minutes:

A question had been submitted by Mr Cross in accordance with Procedure Rule 30.

Mr Cross asked the following question to the Leader of the Council:

What was the remit given to the chairman of the Oakham Town Task & Finish group, and what was the detail of any contract with the chairman, including amount of remuneration, if any, that the chairman will receive?

Remit: The Independent Chairman was provided with the following information:

Remuneration:  £450 per day (excl. travel and VAT) – Mr Wade allows a day of time per meeting to include; preparation of reports and agenda; liaison with RCC, Group Members and members of the public; pre-meets; information gathering; the meeting itself; and agreement of minutes and communications following meetings. Mr Wade does not charge for travel time (he is based in Cambridge) and limits his travel costs to £44.10 per meeting/visit).

Mr Cross did not ask a supplementary question, but asked for the response to be circulated to members. It was confirmed that the response would be included in the minutes.

The timing and attendance details of Oakham Task & Finish Group Meeting #2 has been announced: 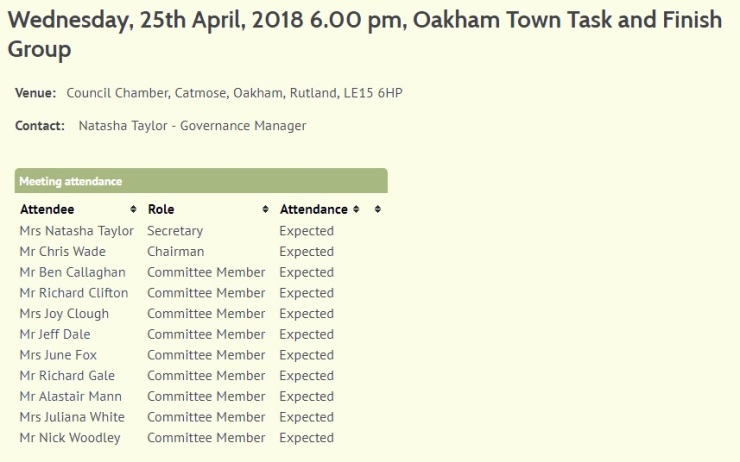 It’s disappointing to note that, with regard to the Oakham Task & Finish Group, RCC appear to be again reverting to type, despite all claims of openness, transparency and ‘working with the community’ made back at the beginning of February.

I refer, of course, to last week’s GIR Scrutiny Panel Meeting where, against the objections of at least one Councillor, the scope of the T&F Group was arbitrarily reduced to cover only Oakham Town Centre and not the whole of Oakham Town.  As Councillor Cross stated, this is not what was agreed at the full Council Meeting on 15th January.  In fact, if you refer to the relevant section of those Meeting Minutes (501), the phrase ‘Oakham Town’ is consistently used.  (The Minutes can be accessed on the Council website under ‘Calendar of Meetings).  Furthermore, Cllr Gale only seconded the motion setting up the T&F Group providing the word ‘Centre’ was removed.  This was agreed, seconded, debated and Resolved accordingly.

This follows on the heels of the previous Scrutiny Panel where it was revealed that ‘it had been decided’ that instead of 11 Councillors presenting their case to be elected to the T&F Group, 6 of the 8 Oakham Ward Councillors had been selected to take that role.

It’s clear to all (except evidently Chris Wade and the Scrutiny Panel) that Oakham issues cannot be looked at only in the context of the Centre itself, as the town is the sum of all of its parts.  The Petition didn’t only focus on the Centre and neither did the debate on 15th January. There are many residents out there who believe that in spite of promises to the contrary, the T&F Group is nothing but a sop to public opinion and RCC certainly appear to be demonstrating exactly that.

On Thursday evening at 7pm the Growth, Infrastructure and Resources Scrutiny Panel will meet in the Catmose Council Chamber.  Item 7 on the agenda will consider Report 61-2018 Oakham Task & Finish Group (https://drive.google.com/open?id=1s85HeaqXWHnKtPRbGiXUswk-VHlYvyi-) and agree the Terms of Reference for the T&F Group.  It is expected that a decision will be made on whether to add a further member of the public to the Group – to represent Residents or other local groups such as the disabled or youth groups.  If this is a agreed then a further Councillor will be appointed to maintain the balance in favour of elected Councillors.  To quote directly from the first Task & Finish Group  (8th March) Meeting Minutes:

“The group agreed to consider a nomination from one additional outside organisation/group that satisfied the criteria detailed above.  This was in line with the discussion at the GIR Scrutiny Panel on 15th February 2018 that the membership could be increased to a maxium of 12 members and took into account that the number of co-opted members could not outweigh the number of RCC elected Councillors.”

As an aside, one might ask the question, ‘How does five co-opted members (assuming one is approved on Thursday evening) outweigh six Councillors in any case…? 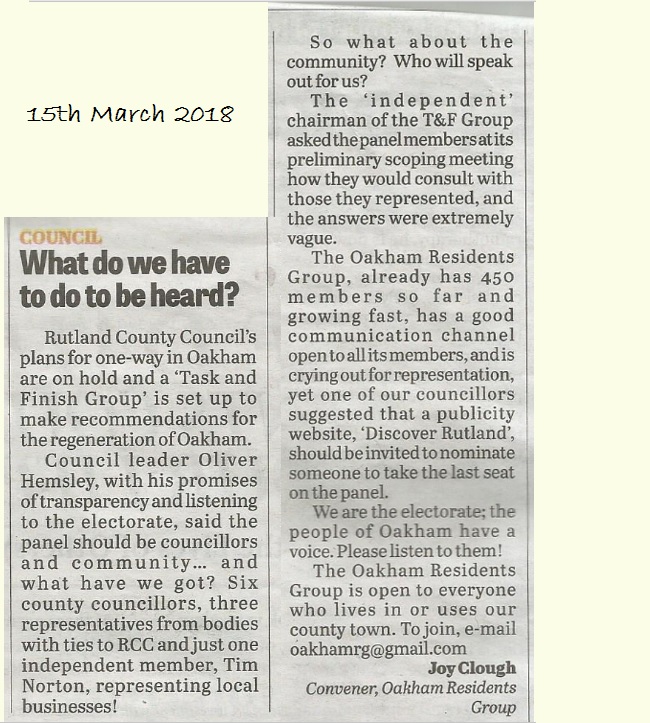 Update from the Chair of Oakham Task and Finish Group