This page is intended to act as a mop-up for any news of interest not quite fitting into the categories on the other site pages…..

Paul Cummings, Chairman of North Luffenham Parish Council with the latest on SGB and Egerton Gilman on the failure of local politics in Rutland and the need for party politics to be taken out of RCC’s Council Chamber.

Following Theresa May’s Brexit Betrayal, two local East Midlands MPs, Andrew Bridgen and Ben Bradley have shown themselves to be men of integrity like Boris Johnson and David Davis. Bradley resigning as a Conservative Vice-Chair and Bridgen submitting a letter of no confidence to the 1922 Committee. At the end of his piece, Tony Roe, (who covered the Oakham Protest March in December last year), adds the comment that our own MP, Alan Duncan, “shouted to a camera as he went into a meeting, ‘Business As Usual'”… Will Duncan take a principled stand like Bridgen and Bradley? No chance… This is the ‘lifelong Eurosceptic’, who suddenly became a Remainer in the run-up to GE 2015, having read all the signs wrong and who sits resolutely on the fence on our local issues, (Oakham One-Way, St George’s Barracks etc etc). I’m afraid all those in Rutland & Melton that, like me, supported, or have to come to support a fair and clean Brexit, would be foolish to expect a principled stand from that particular quarter…
Fast forward to 06:16 to see Tony Roe’s piece. This will only be available till 6pm today…
https://www.bbc.co.uk/iplayer/episode/b0b980cb/east-midlands-today-evening-news-10072018
10th July 2018
The latest news from Rutland County Council brings the number of Conservatives resigning from Council or Cabinet, for one reason or another, over the last six months to four:  https://www.rutland.gov.uk/my-council/council-news/changes-at-rutland-county-council/ 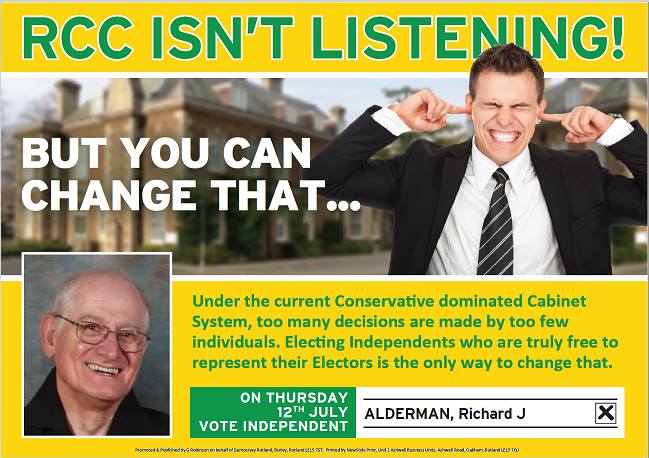 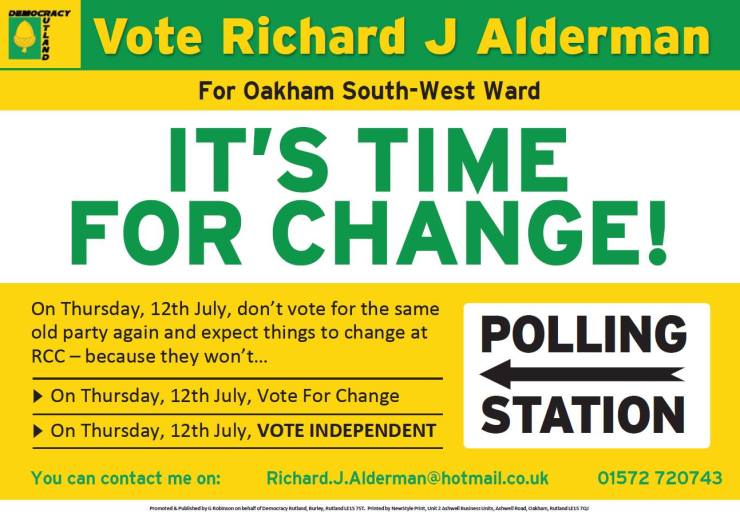 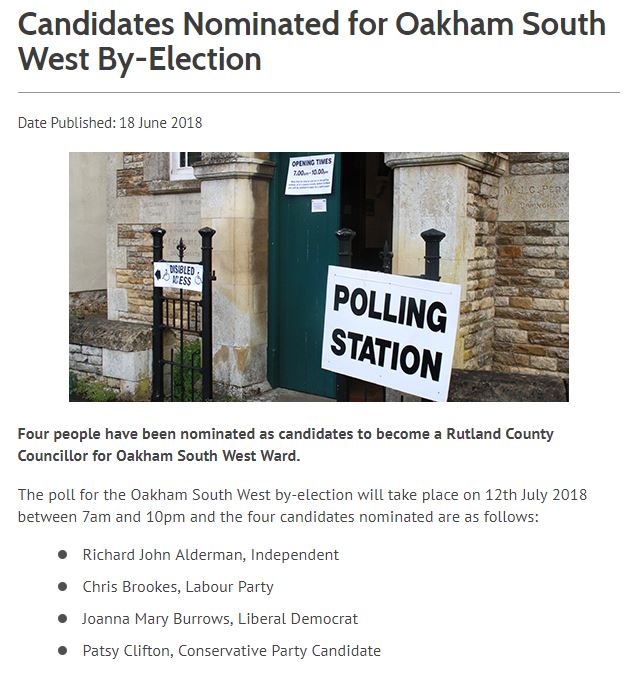 Following on from the discussion about the Scrutiny Panel arbitrarily changing the scope of the remit of the Oakham Task & Finish Group to ‘Oakham Town Centre’ and not ‘Oakham Town’ as had been previously agreed; it’s worth mentioning that at this month’s Full Council Meeting the phrasing used is again ‘Oakham Town’.  OK2WAY advise that they will be directly addressing this attempt to change the scope at T&F Meeting #2 on the 25th April and it is to be hoped that this first attempt to move the goalposts will be stopped in it’s tracks.

Wording from the formal minutes:

A question had been submitted by Mr Cross in accordance with Procedure Rule 30.

Mr Cross asked the following question to the Leader of the Council:

What was the remit given to the chairman of the Oakham Town Task & Finish group, and what was the detail of any contract with the chairman, including amount of remuneration, if any, that the chairman will receive?

Remit: The Independent Chairman was provided with the following information:

Remuneration:  £450 per day (excl. travel and VAT) – Mr Wade allows a day of time per meeting to include; preparation of reports and agenda; liaison with RCC, Group Members and members of the public; pre-meets; information gathering; the meeting itself; and agreement of minutes and communications following meetings. Mr Wade does not charge for travel time (he is based in Cambridge) and limits his travel costs to £44.10 per meeting/visit).

Mr Cross did not ask a supplementary question, but asked for the response to be circulated to members. It was confirmed that the response would be included in the minutes.

The next meeting of the Panel charged with reviewing the work of the Oakham Task & Finish Group will take place on the 12th April.  This meeting will precede the second meeting of the T&F Group itself which takes place on the 25th April.  Despite the arguments around the arbitrary change of scope of the T&F Group (from Oakham Town to just the Town Centre) at the previous Scrutiny Panel, there appears to be no mention of this in the documents supplied for this GIR Scrutiny Panel Meeting so it would seem that already the T&F Group are having their wings actively clipped by RCC and steered in the direction that RCC demands…..

The One Show visits Oakham – Advance to 21 minutes in….